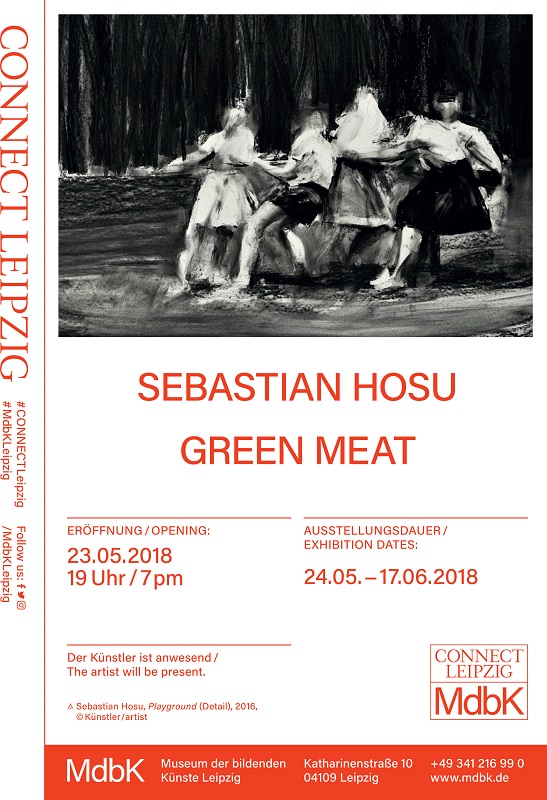 Green Meat. Green Meat, the title of the Sebastian Hosu’s first institutional solo exhibition in Museum der bildenden Künste Leipzig, sounds like a contradiction in terms. Read with a negative connotation, it could refer to rotten meat. Yet, with a positive spin, it appears as a vegetarian alternative to meat. No matter which version you prefer, it is a congenial and interesting dichotomy, which hints at the key features of Hosu’s imagery: landscape and the body.

Hosu’s paintings and drawings are set in natural surroundings, though for the artist, nature also includes urban leisure facilities like playgrounds, parks or outdoor pools. Some of the figures appearing in the images are recruited by the artist from private family photographs. However, they are not transferred in their entirety to the artworks. They gradually meld into the image spaces, dissolving into abstraction, to form inseparable connections with the media of painting and drawing. The brush strokes that break through the barriers of form and the chalk wiping technique that dissolves their form, are ever-present features of the style. All that remains of the original photos are mysterious fragmented bodies.

Sometimes, however, one and the same figure appears in multiple images. In particular, Hosu often features a posture reminiscent of athletes competing in a tug-of-war. This ponderation recurs repeatedly in different levels of abstraction in two of his series of works, Outscape and Playground.

The original photograph could be of a sporting event that happened a long time ago. However, in his works, Hosu destroys this image and visual record, which was intended to keep the memory of this family experience alive. His works are not mere depictions of experiences, they are studies of the elements of the human body in nature, devoid of anecdotal potential. With time, memories fade, photographs yellow—and meat turns green. Or are we all vegetarians?
—By Marcus Andrew Hurttig /Translated by Brendan Bleheen

___________________
Dr. Marcus Andrew Hurttig was born in Hamburg in 1974.
The art historian is author and editor of several publications
and has written numerous texts about the history of art and
contemporary art. Since 2011 he is curator at Museum der
bildenden Künste in Leipzig.